The Van de Steene Mill in Kaprijke is a stone mill that was built in 1804.  It was a grain mill.  In 1920 the cap was blown off.  A mechanical mill was then installed and worked till 1950.

On 12 December 2002 the mill, the miller's house and farm were declared a protected monument.  At this writing (March 2005) the top of the mill is wide open.  So are the windows.  Inside there are parts of floors and staircases and rotting beams that have crashed down from far above.  Outside the masonry is crumbling or falling away.

So at the risk of boring you to death I ask you once again: what is the good of declaring a building to be a listed monument if not a thing is done to even close the roof and give it at least this minimal protection from the elements?  You may rightly reply that no person is allowed to demolish it.  Time will do that with or without a declaration.

The site is privately owned and in the meantime the owner is not allowed any economic activity on his property because now that it is listed it has to be faithfully restored to some earlier condition after obtaining planning permission and government grants. 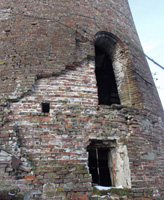 Planning permission ?  God forbid !  That means anything anyone wants to do to it has to get prior approval out of a government committee.  At the risk of boring you to death I ask you more in sorrow than in anger: is there anything more awfully mediocre than a government committee ?  At this writing nothing at all to protect the property is in the pipeline: no government committee has been set up to eventually create a commission that will finally decide to "study" the "case" and then forget about the file in some bottom drawer somewhere.

Congratulations to our well paid chauffeur driven ministers who so much like to take the credit when something finally does get done—more often than not in spite of them.  Here in our text on Doornzele you can find more on this very same topic... at the risk of boring you to death.