The name comes from an eponymous river "poca".   This Celtish word means "the beautiful", "the agreable".  We find this name for the first time in 1155.  The "oe" letters in Poeke are pronounced like the "oo" in book and the final e is pronounced like the e in "the".  (Here is a Dutch pronunciation guide.)  Historically the town belonged until the end of the Ancien Regime (1789) to the Corporation of the "Kasselrij" of Kortrijk (Courtrai) and it came under the "Roede" of Tielt ("roede" = rod).  The village undoubtedly developed around the castle of the Seigneurs of Poeke.

In the Middle Ages the Lord of the Castle was an important nobleman in the Flanders County.  From his fortresses he assured control over the surrounding area for the Count of Flanders.

In 1452 the city of Ghent revolted and the Castle of Poeke was taken.  But the next year Philip the Good, Earl of Flanders and duke of Burgundy defeated the occupants and without mercy the fortress was razed to the ground.
(Why they call him "the Good" I can't imagine.  Who or what was he good for?  He conquered our regions at great cost and then imposed a heavy tax burden.  Court life had never before been so extravagant but war was never far away.  Yes, he was good at begetting illegitimate offspring.)

The ruins of the castle were left there until 1577 and in 1597 they came into the hands of de Preudhomme d'Hailly de Nieuport, a noble family.  In the first half of the 17th Century these noble lords built a new castle which was to serve them as residence.

The most famous baron of this line was Charles Florent Idesbald (1721-1792).  During the Austrian Period he was the chamberlain of Charles of Loraine, the governor.  His attempts to start up a silk worm breeding program on the domain were an abject failure.  The family got poorer and poorer during the 19th Century and in 1872 the chateau was sold to the Pycke de Peteghem family.  Isabelle de Preudhomme d'Hailly then built something much smaller called "Chateau The Reigerbeek" (Heron River).

The new lord had his coat of arms put in the forefront of the castle.  There came a magnificent wrought iron gate.  The back of the castle was thoroughly changed by installing a chapel on the first floor.  Lots of rococo elements were added which transformed its sober classical outlook.  Also the park surrounding the castle became more romantic.  New buildings were put up such as a coach-house and a circular kennel with in the middle of it a bake house.  And finally a walled vegetable garden was built.

Here is a close-up of part of this lovely old farm house.

In 1955 the last descendent of the Pycke de Peteghem died and the castle and park first came into the hands of "Duinen en Heide" (Dunes and Heath), a non profit organization engaged in the care of abandoned children.  In 1977 with the merger in Belgium of so many towns Aalter became the owner of the domain.  The castle was thoroughly restored in 1996-97.

The church of Poeke was built in 1842 on the site of the old gothic church.  Saint Lambertus is its patron saint. 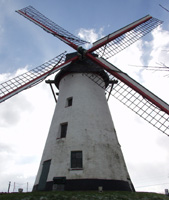 Poeke also has a beautiful old windmill.  Artemeers Mill was built in 1810.  It's fully operational once again and it still has most of its original equipment.  Here is a page dedicated to it.  You want to go and see this mill.  Go on a Tuesday or Saturday when it's open from 10 a.m. to 5 p.m.

Poeke with its 582 ha (1,437 acres) is since 1 January 1977 administratively a part of Aalter together with St.-Maria-Aalter, Lotenhulle and Bellem.  According to the official website of Aalter on 1 January 2004 there were in Poeke 532 inhabitants and on 1 January 2013 this had gone up to 544.